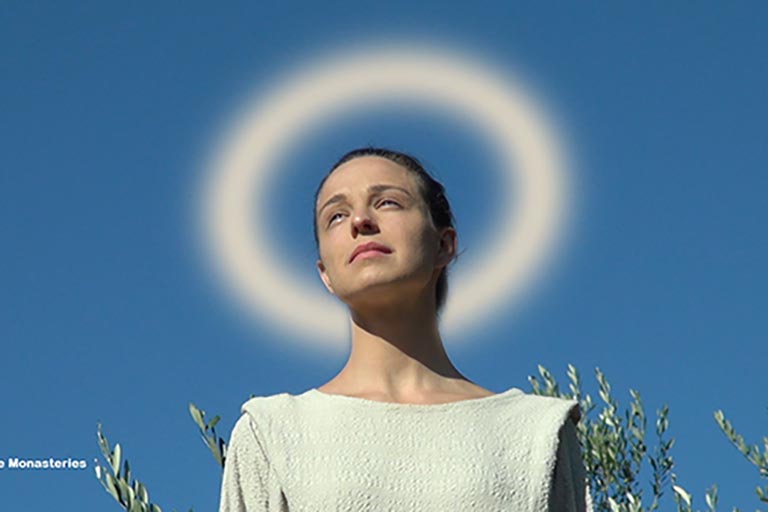 St. Catherine of Siena: A Saint for Our Time

She is one of the most important figures in Church history – one of only four female doctors out of the 36 doctors of the Church. Yet St. Catherine of Siena, a 14th Century mystic, was only 24 when she began her public mission, which lasted only eight years. Despite living at a time when most women were regarded as little more than chattel, she managed to accomplish things that seemed impossible for anyone, much less a female.

“How alive she was!” says Valgiusti. “She could do things that look impossible for a woman at that time – and also this time! She was not even a nun; she was a lay person! And young! She reminds me of Mother Angelica. She had the skill, the capacity to dare to keep going, to face obstacles and form some kind of strategy. There were a lot of failures, a lot of problems, but she kept going!”

Catherine spent her childhood and youth in Siena doing works of mercy. But the Lord eventually revealed to her that He would be sending her to speak to Kings and Popes in His name. Catherine’s extensive travels included France, where she went to convince the Pope to return to Rome, and many other places. “I tried to keep that in my program because I think it shows much she was guided by the Holy Spirit,” Valgiusti said. “It was a mission to save souls. Even when she was speaking to [political figures at high levels], she had in mind the salvation of souls and service to the Lord and to the Church.”

Fr. Thomas McDermott, O.P., who wrote the book, “St. Catherine of Siena: Spiritual Development in Her Life and Teaching,” served as the theological consultant to the docu-drama. “Father McDermott makes the importance of St. Catherine’s teachings clear,” Valgiusti says.

In addition, Valgiusti scored an interview with the Metropolitan Archbishop of Siena, H. E. Msgr. Antonio Buoncristiani. The Archbishop provides an important perspective on the spirituality of the Sienese saint and her role in the history and culture of the city, and explains that, even today, the city of Siena is committed to keeping the life and works of this important doctor of the Church alive.

In fact, that’s a theme of many of St. Catherine’s many supporters. As Valgiusti travelled to Siena, Genoa, Florence, Rome, Varazze, and to the famous Lecceto Monastery during filming, she was struck by just how much St. Catherine witness resonates with people around the world today.

She found that St. Catherine’s spirit lives in an order dedicated to her in Mosul, Iraq, which is now under occupation by the Islamic State. During the filming, Valgiusti interviewed a religious sister who formerly resided in one of the 19 convents in the now occupied territory. “I made one of the sisters’ witness to what happened to them,” she said.

She also discovered a wonderful chorus of 20 nuns from the Lecceto Monastery in Tuscany, which St. Catherine used to visit, and which today is home to an order of Augustinian nuns. Viewers will hear some of their beautiful singing in the film. Valgiusti was especially thrilled to be able to include magnificent pieces of sacred music composed by Rev. Father Valentino Miserachs, Maestro of the Liberiana Chappel of St. Maria Maggiore Basilica in Rome in the docu-drama.

Finally, Valgiusti discovered that St. Catherine’s spirit lives on in the City of Varazze, which was freed from the Black Plague, also known as the Black Death and the Bubonic Plague, thanks to St. Catherine’s intercession. Valgiusti found that even today the citizens of Varazze host an annual parade, complete with costumes, in which St. Catherine’s life and the miracles associated with her are recounted.

“In my docu-drama, I try to give a sense of a devotion that is alive,” Valgiusti says.
St. Catherine’s witness extends to the filmmaker herself. Even though Valgiusti is known for her intrepid adventures to the Middle East and Africa, where Christians today suffer so much, she says she marvels at the things St. Catherine was able to do and the places she was able to go. In completing this film, and in planning her future itinerary, Valgiusti says simply: “St. Catherine always gives me some courage.”

So what does Valgiusti hope viewers take away from this film?

“I’d like for them to be inspired to know more about St. Catherine,” she said. “She left her masterpiece “The Dialogue,” 26 prayers, and 381 letters. Many letters have been translated. There are books like Father McDermott’s. He also has a beautiful website about St. Catherine, http://www.drawnbylove.com.

“St. Catherine faced some of the same problems we do: the political situation, the situation in the church, the poverty, the salvation of souls,” Valgiusti continued. “If you follow her, you can grow and also be helped in your personal spiritual way of believing.”